Unmanned aerial vehicles (UAVs) generally depend on their wings to get around. Just like their earth-bound cousins, unmanned ground vehicles (UGVs), usually depend on wheels. But researchers in Drexel University’s College of Engineering plan to change that by figuring out how to add dexterous hands and arms to the craft.

Paul Oh, a professor of engineering and head of Drexel’s Mechanical Engineering and Mechanics Department, will use a grant from the National Science Foundation to examine the torques and reaction forces that are associated with applying robotic arms to UAVs. Other members of the research team include M. Ani Hsieh, James Tangorra, and Jin Kang. The work will be conducted in the Drexel Autonomous Systems Laboratory. The $649,999 National Science Foundation grant covers a period of three years. 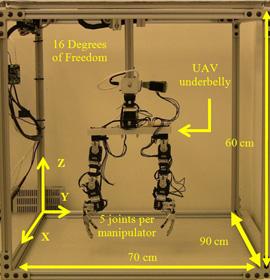 To determine how adding limbs to a UAV will affect its performance during flight, researchers will retrofit an adjustable gantry system with robotic arms and hands.
(Source: Drexel University)

Most of the tasks UAVs currently perform are passive. During flight, they primarily do intelligence gathering, collecting video and other types of data for reconnaissance and surveillance. The National Science Foundation grant is for research into Mobile Manipulating UAVs, or UAVs that can perform tasks such as interacting with objects located near the ground or on it. Possible applications of UAVs with arms and hands include agricultural handling, repair of infrastructure, border inspection, and helping with recovery from disasters as assistants to human first responders.

“These types of aircraft will advance field service robotics for things like search and rescue and disaster mitigation,” Oh said in a press release. “It could help with infrastructure repair; instead of hoisting someone up to a bridge, these robots might be equipped to fly up to the bridge and start welding.”

Adding arms and hands, as well as using them in flight, to a flying machine could easily destabilize it. The team’s research will therefore focus on how the forces and torque associated with the movements of limbs on a UAV will affect its performance, and how they can be designed to operate without crashing the UAV. Oh said this design problem has not been studied before.

To determine those effects, team members will start with an adjustable gantry system that is configured to mimic a UAV’s typical lateral and longitudinal movements. They will retrofit the system with robotic arms and hands. Using the data gathered from this gantry system, the team will then build a working prototype.