The company has now introduced a quad cluster Furian GPU called PowerVR Series8XT GT8540 that can simultaneously drive up to six 4K screens at 60fps thanks to an 80% fillrate density improvement, and supports virtualization providing separation of services and applications. 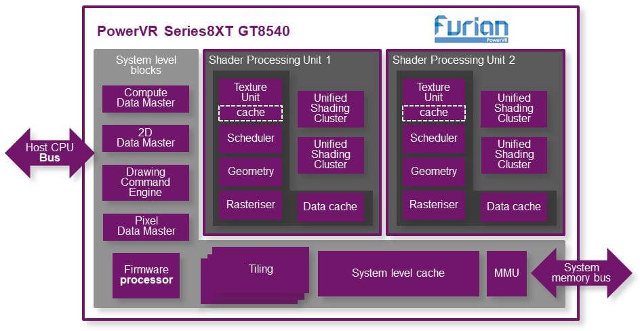 Hardware virtualization is equally important for automotive application, as you’ll want to separate safety-critical code, from infotainment applications for example, so if the latter crashes, the safety-critical code can still run unhindered. Each would run on separate shaders processing unit, with up to 8 different  operating systems running in their own protected space:

The Series8XT GT8540 can support long-running compute workloads on a single Shader Processing Unit (SPU) for ADAS functions such as lane departure warning, blind-spot detection, and surround view, amongst others. Other tasks, such as infotainment and cluster, can run on the second SPU, using prioritizing mechanisms to reach system performance targets.

The video below illustrates the principle with the always running dashboard, with a navigation app crashing and rebooting in a separate display. The GPU can also prioritize resources for one of the display.

This type of process separation is not new though, as we previously covered a dual display automotive demo on NXP i.MX 6 using Mentor Embedded Hypervisor in 2013, but the Furian GPUs can support hardware virtualization so overhead should be lower.