Venus Supply is an embedded systems company based in Bangkok, Thailand that sells products through their ThaiEasyElec website/brand, as well as a act as a local distributor for popular DIY electronics items. I previously tested their ESPino32 ESP32 board, and the company has now send me another of their new product called “3G HAT Expansion for Raspberry Pi” and based on Quectel UC20-G that support 3G and GPS/GLONASS connectivity globally, meaning it should work in any country with 2G or 3G coverage.

After listing the specifications, going through unboxing and assembly with a Raspberry Pi 2/3 board, I’ll write some quick start guide to show what I had to do to use GPS and connect to 3G with a Hologram SIM card.

I received the kit in a carton box with three zipped packages: one for the board and accessories, and two for the GPS/GLONASS and 3G antennas which are not included by default. 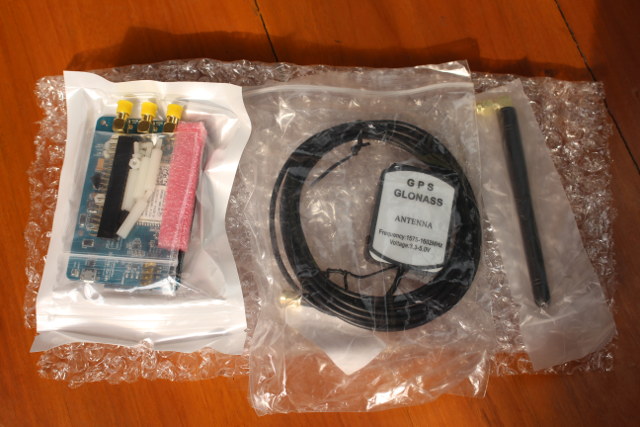 The GPS antenna comes with a 3-meter cable which should make it suitable to install in most cars or trucks, and the HAT package includes an extra zip bag with spacers, screws, nuts, and a 40-pin female header. I’ve also been told a 25cm micro USB cable should be included, but it seems they forgot it for my package… 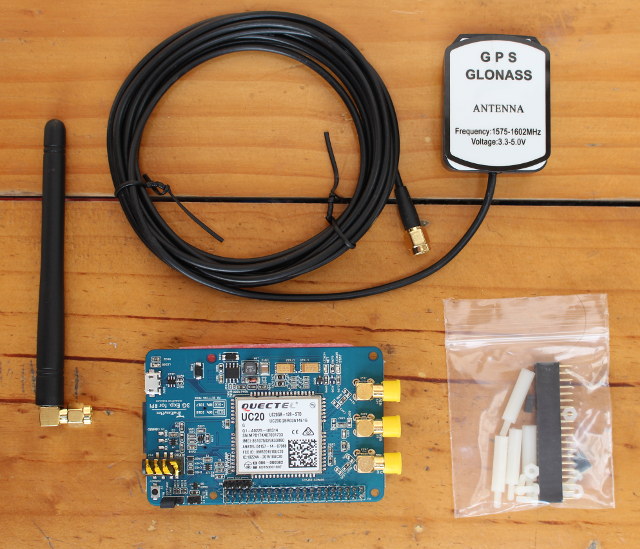 Looking closer at the board we can see Quectel UC20GB module in the center of the board, the three RP-SMA antenna connectors clearly marked with DIV, GNSS, and MAIN, the micro USB port for power and data, the 3.5mm audio jack, and in the top right connector J3 2-pin header to enable autostart, 3-pin P8 header to select GPIO 17 or GPIO 18 for software on/off, and the power key to manually start or stop the the module. 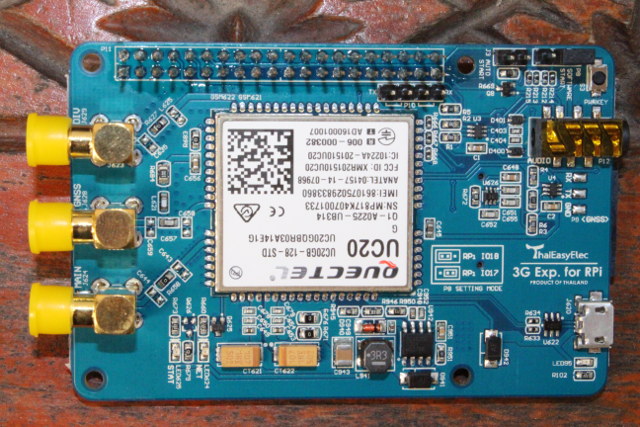 The other side of the battery comes the audio codec board based on Nuvoton NAU8814Y mono audio codec, the SIM card slot fitted with a black dummy SIM card, a CR1220 coincell battery for GPS fix backup, and a 40-pin female header used for connection to the Raspberry Pi. 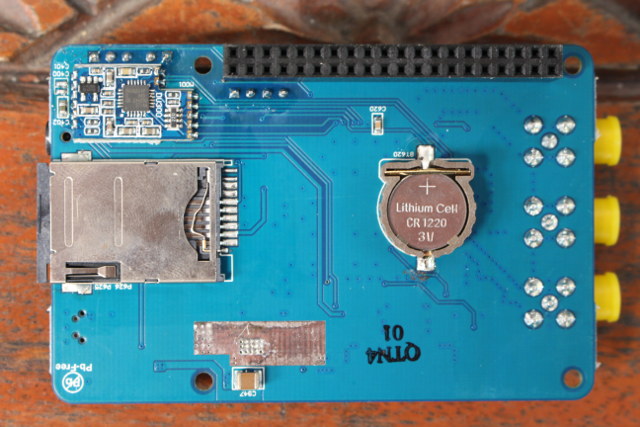 I’ve been told the battery supploes power to the internal clock engine of the module, which can calculate the new position of satellites and get GPS fix faster  from data used up to 3 days ago. 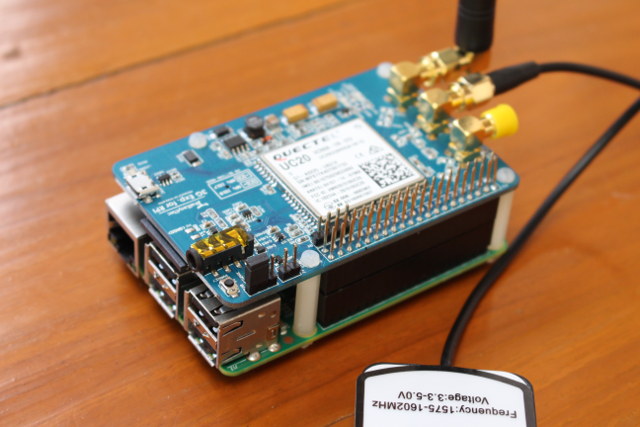 Connect the cellular antenna to the MAIN connector, and the GPS antenna to the GNSS connector. You’ll also need to flash Raspbian to a micro SD card. I’ll run the same Raspbian Stretch Lite image as I used with ANAVI Light pHAT starter kit.
If you want to follow the instructions provided by ThaiEasyElec (in Thai only for now, but easy enough to follow, and an English version is coming), you’ll need a GUI, so I’d recommend you install the full Raspbian Stretch image and connect an HDMI display, although you may run VNC client as well. I’ll do something a little different as I’ll do an headless setup instead, using Ethernet and SSH most of the time, but to test 3G, I’ll also disable Ethernet, so I also connected a USB to serial cable as shown below in order to access the serial console. 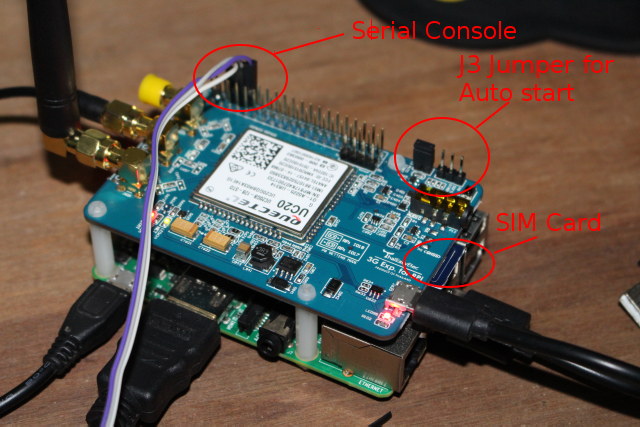 Find a (short) micro USB to USB cable to connect the micro USB port of the HAT expansion board to the one of the USB ports of the Raspberry Pi to power on the board. I also had to remove the dummy SIM card, and insert my own SIM card with the contacts facing the board. After installation, we’ll see around 3mm of the SIM card, but that’s normal. Finally, you’ll need to decide how you want to manage the power: either with the power button, J3 jumper to autostart, or with pin 17 or 18 from the Raspberry Pi. I decided to move the jumper to J3 to always power on the module, but if you run on batteries, you’ll probably want to use the GPIO pin instead.

Verify the 3G HAT is Recognized in Linux

Now we are ready to start our Raspberry Pi board, and login to a terminal via SSH, serial, or in the desktop. We should find Quectel UC20 module with 05c6:9003 VID:PID with lsusb:

If you don’t see it, make sure the USB cable is connected, and you’ve powered the module up. I recommend you move the jumper to J3 at first like I did. Then you should see four ttyUSB devices:

Each are used by the module as follows:

The first command (AT+QGPS=1) turns the GNSS module on, and the second one (AT+QGPSEND) turns it off.

Let’s keep it on for now, and connect to /dev/ttyUSB1 @ 9600 baud to check NMEA output which should be updated every second when GPS is enabled:

That’s the meaning for each field:

GPGSA does not have data in the output above, simply because the GPS fix did not occur yet.

If you just want to enable GNSS each time the module is powered on, run the following command:

To disable this option, simply run the same command with 0 instead of 1. You can also query “autogps” status but running the command without the second parameter:

You’ll find more details about the GNSS AT command set for GPS and GLONASS in  Quectel UC20 GNSS AT Commands Manual (pdf).

Reading NMEA sentences is possible, but not really user friendly, and if we want to see a nice representation of the data we can run the GPS Daemon (gspd) and client (cgps) instad. Let’s exit both picocom sessions with GPS still running, and install the necessary packages:

The daemon will automatically run after installation, so let’s stop it…

… in order to run it with our own parameters, i.e. using /dev/ttyUSB1 NMEA interface:

Now we can run the client as follows:

After a few seconds should get a fix with details information (left) and data about the satellites (right). 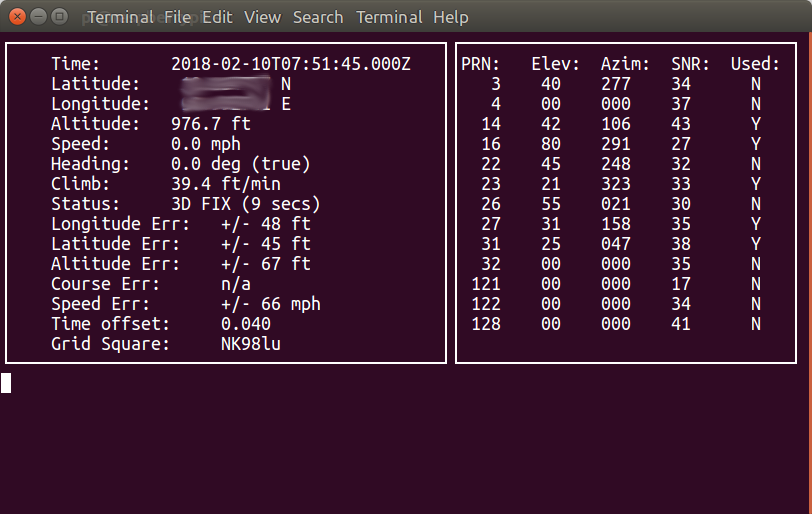 I previously played with GPS using NavSpark mini GPS Module (Arduino compatible), and at the time  I could manage to get a GPS fix inside my room, but in this case I had to move the antenna outdoor to get signal. If you want to integrate such capability into your own app, you may want to study cgps source code.

It’s also possible to get the coordinate through /dev/ttyUSB2 terminal using QGPSLOC AT command with one of the following three modes:

The fields from left to right:

Short explanation for the not-so-obvious fields:

Let’s now move to the cellular part of the module. I’ll use Hologram developer IoT SIM card, but any 3G SIM card should do.

Booth can be found in umtskeeper package that we can install from a tarball:

We then need to install some extra packages:

We’re then told to launch Sakis3G in interactive mode to configure the connection. The look of it will depend whether you launch it from the dekstop, a SSH terminal, or a serial terminal. The interface looks really ugly (and messy) from the serial console, so instead I launched it from an SSH terminal: 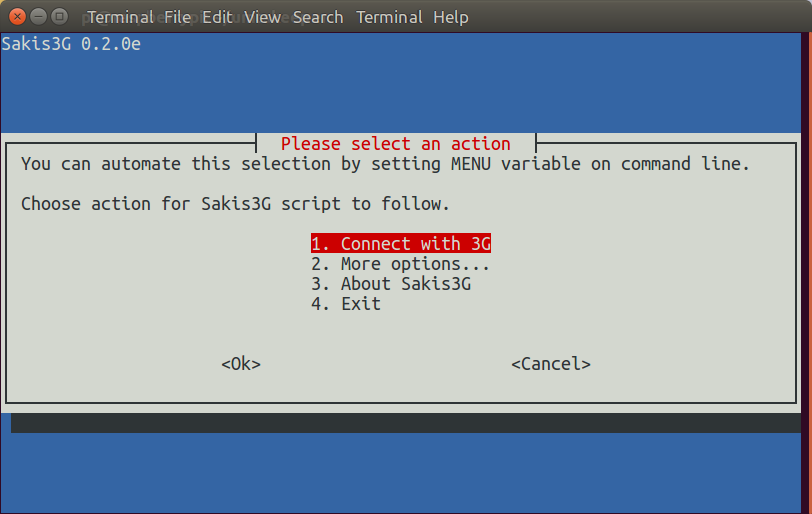 We need to select 1. Connect with 3G, then 3. Custom tty…, and input /dev/ttyUSB3 for CUSTOM_TTY variable. 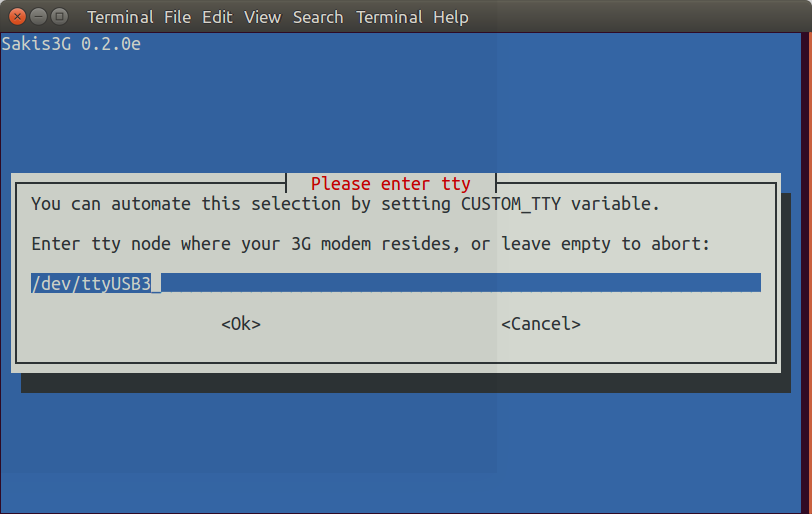 The next step auto-detected the correct APN (HOLOGRAM), so I just selected OK, and then was asked about APN_USER and APN_PASS. 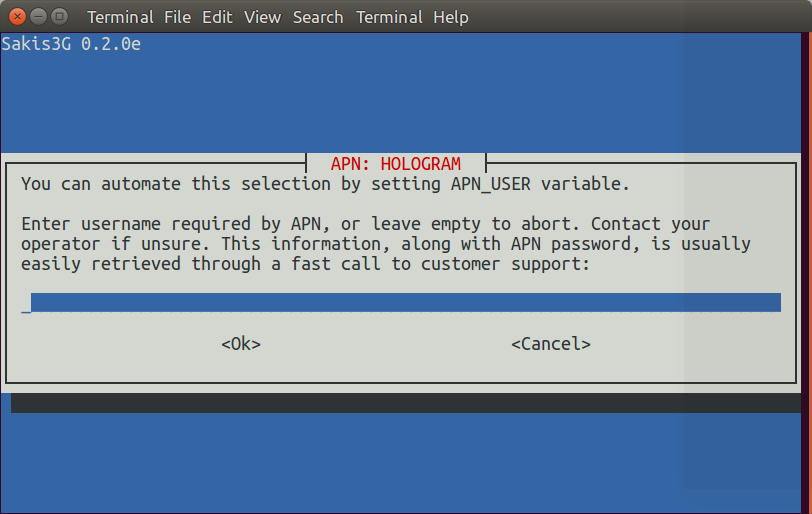 Those parameters will also depend on your specific connection. Hologram does not use user and password, but simply pressing Enter will abort the configuration, so I entered 0 for both. After that, Sakig3G will try to connect and it worked! 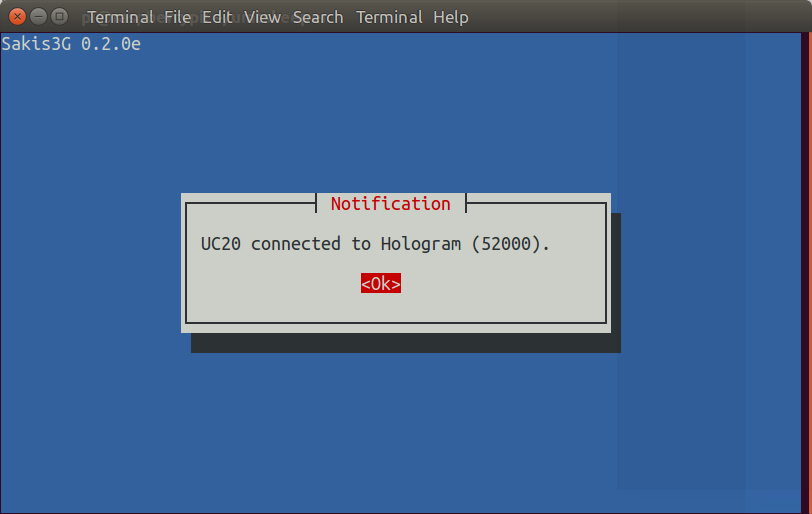 Pressing Enter will bring us back to the main menu, where we can select Connection Information to find a few more details. 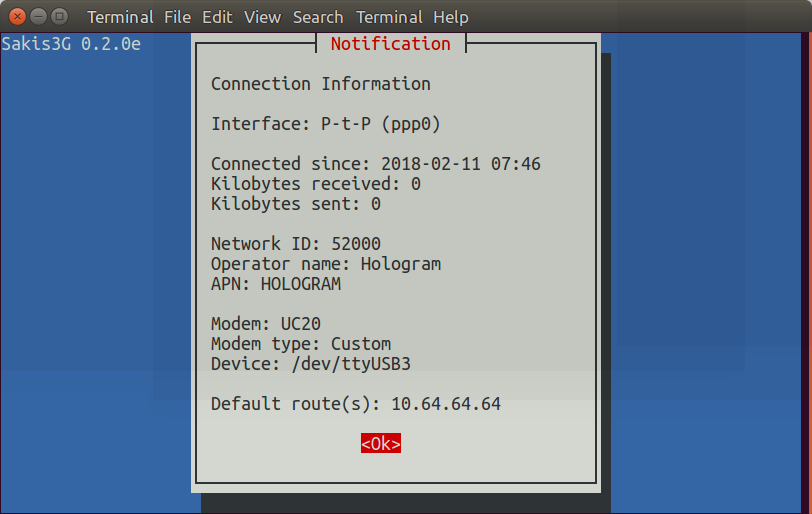 Let’s go back in the top menu, disconnect, and exit Sakis3G. Now we can run umtskeeper with the same parameters:

But the output does not look so good the very first time, since it complains about “no modem connected”:

But eventually we do get a connection. If you connect later, the Internet status message changes to:

While I was eventually successful, the first time I tried Method 1 I failed for some reasons, so at the time I looked for alternatives way to connect, and found Sixfab also used Hologram SIM card with their own RPi 3G/4G shield – also based a a Quectel module, and instead wrote ppp-creator.sh script.

So I downloaded it to my Raspberry Pi board, and executed it which created some other connection scripts.

Now we can run pppd call gprs command to establish a connection:

All good, and even simpler than the first method, although you may have to change the script in case you need APN username and password.

Whether we use method 1 or 2, we can now verify ppp0 is indeed up and connected.

I did that with Ethernet connected, so now I’ll disconnect Ethernet, turn it down, and start the script from the serial connection as a background process:

Again we can see on ppp0 is an active connection:

I can test outboud traffic with ping.

All good, but then I tried to connect via SSH using

I’m not familiar enough with 3G/4G connectivity to know if it’s a common issue but in the case of Hologram service we need to setup tunnelling to access via SSH (or another port/service). This can be done via SpaceBrige program or the command line, as you’ll find both methods on the relevant page on Hologram website.

I used SpaceBridge program in this case. You can download the client for Windows, Linux, or Mac OS. This is what I had to do in Ubuntu 16.04:

Now you’ll need to enable Tunneling for your device in Hologram dashboard, and get your Hologram API key, which you can generate and copy from your account.

Click OK, select your device(s), input your device port (e.g. 22 for SSH), and the local port on the computer to remotely access your Raspberry Pi over 3G. 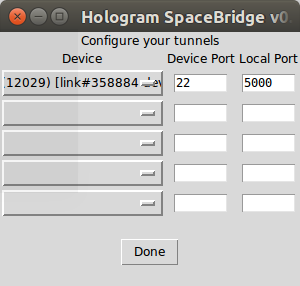 Click Done, and within a few seconds the tunnerl should be up and running.

I was finally able to connect the Raspberry Pi over SSH using the following command:

I could also get the GPS coordinate from there using cgps client.

If you want to stop the connection manually started with pppd call gprs, find the PID, and kill it:

In your actual project, you’ll want to control the connection using initd scripts or systemd.

Tweet Venus Supply is an embedded systems company based in Bangkok, Thailand that sells products through their ThaiEasyElec website/brand, as well as a act as a local distributor for popular…