After the new (ARM based) Samsung Chromebook released last month, Google announced the Acer C7 Chromebook based on an Intel Celeron processor at a cheaper price ($199 vs $249), but at the cost of shorter battery life and the addition of a fan. 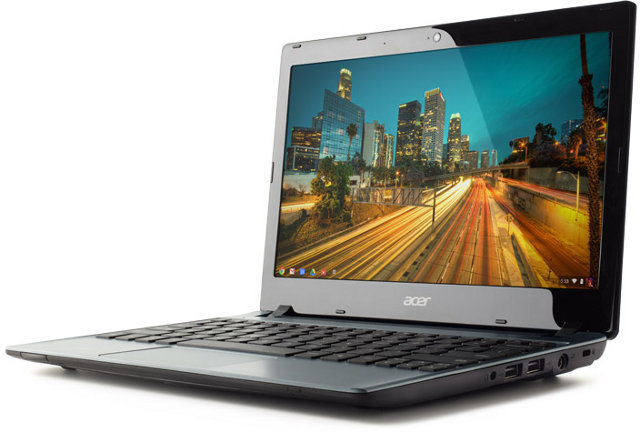 Beside the Celeron processor @ 1.1 GHz, the new Acer C7 Chromebook comes with 2 GB RAM, a 320 GB hard drive, features a 11,6″ display, weights 1.3 kg and the 37Wh battery can last for  over 3.5 hours. Other features include Wi-Fi, Ethernet, Bluetooth. The Acer Chromebook comes with 3 USB 3.0 ports, HDMI & VGA video outputs, a 2-in-1 card reader, a webcam, built-in stereo speaker and audio jacks for headphones and microphones. Whereas the Exynos 5250 can boot in less than 10 seconds (Thanks partialy to the SSD), the new Acer Chromebook boots up in 18 seconds which is not too bad.  Google will also provide 100 GB of free storage on Google Drive for 2 years.