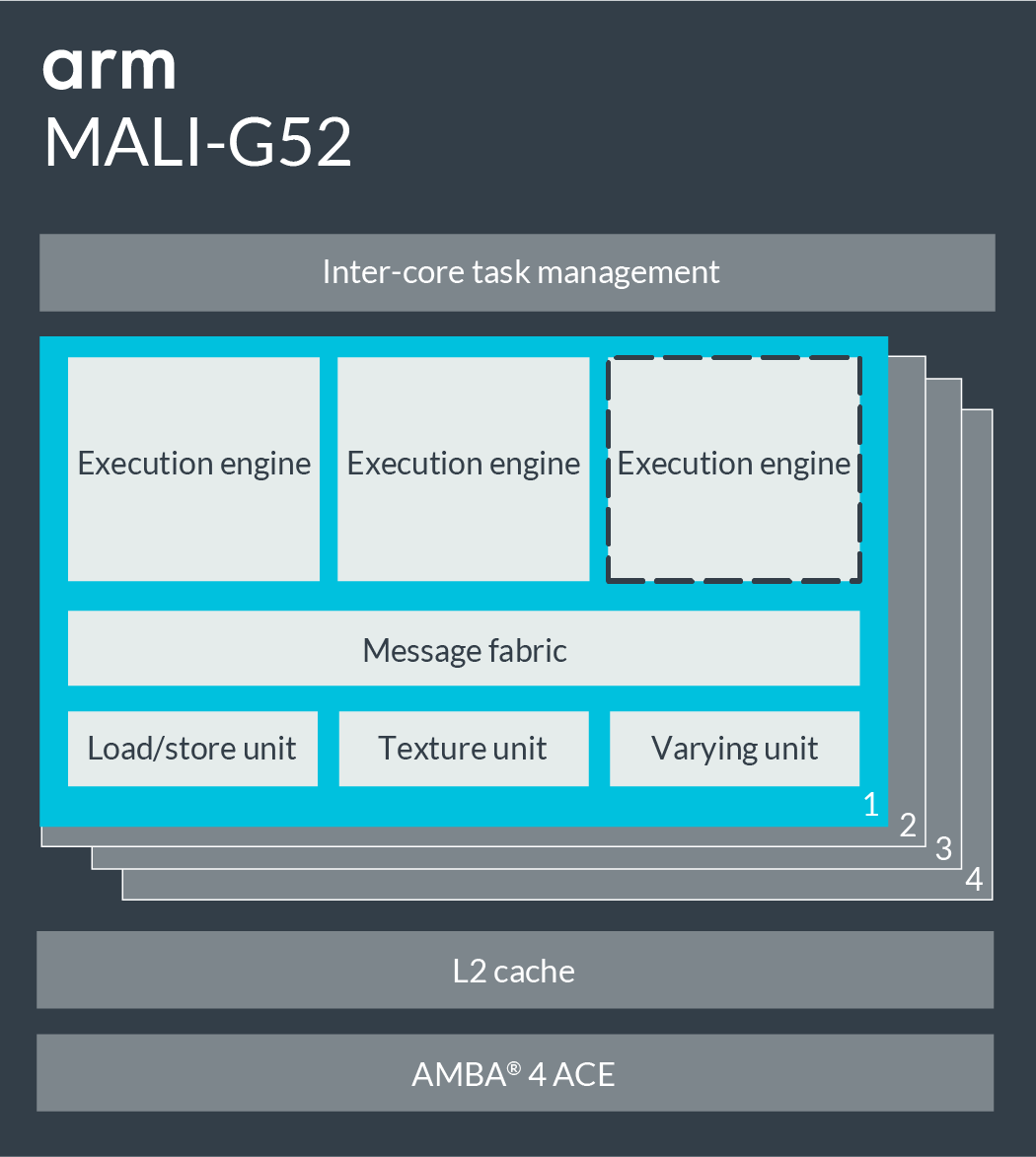 Arm may have introduced Project Trillium for object detection and machine learning a few weeks ago, but the solution is better suited to premium devices, so the company’s Mali-G52 bitfrost mainstream GPU aims to fill the void for mid-range devices with up to 3.6 times faster machine learning capability over Mali-G51. Based on the first illustration, Mali-G52 will probably be coupled with DynamIQ Cortex A75/A55 processors.
Other benefits of the new GPU include 30% more performance density, and 15% better energy efficiency. Mali-G52 will be clocked up to 850 MHz delivering 6.5 Gpix/s pixel/texturing throughput, and be manufactured using a 16nm process technology. The GPU should bring better support for augmented reality, gaming, and machine learning to mainstream application processors, as well as allow for better UIs in next generation smart TVs and set-top boxes. 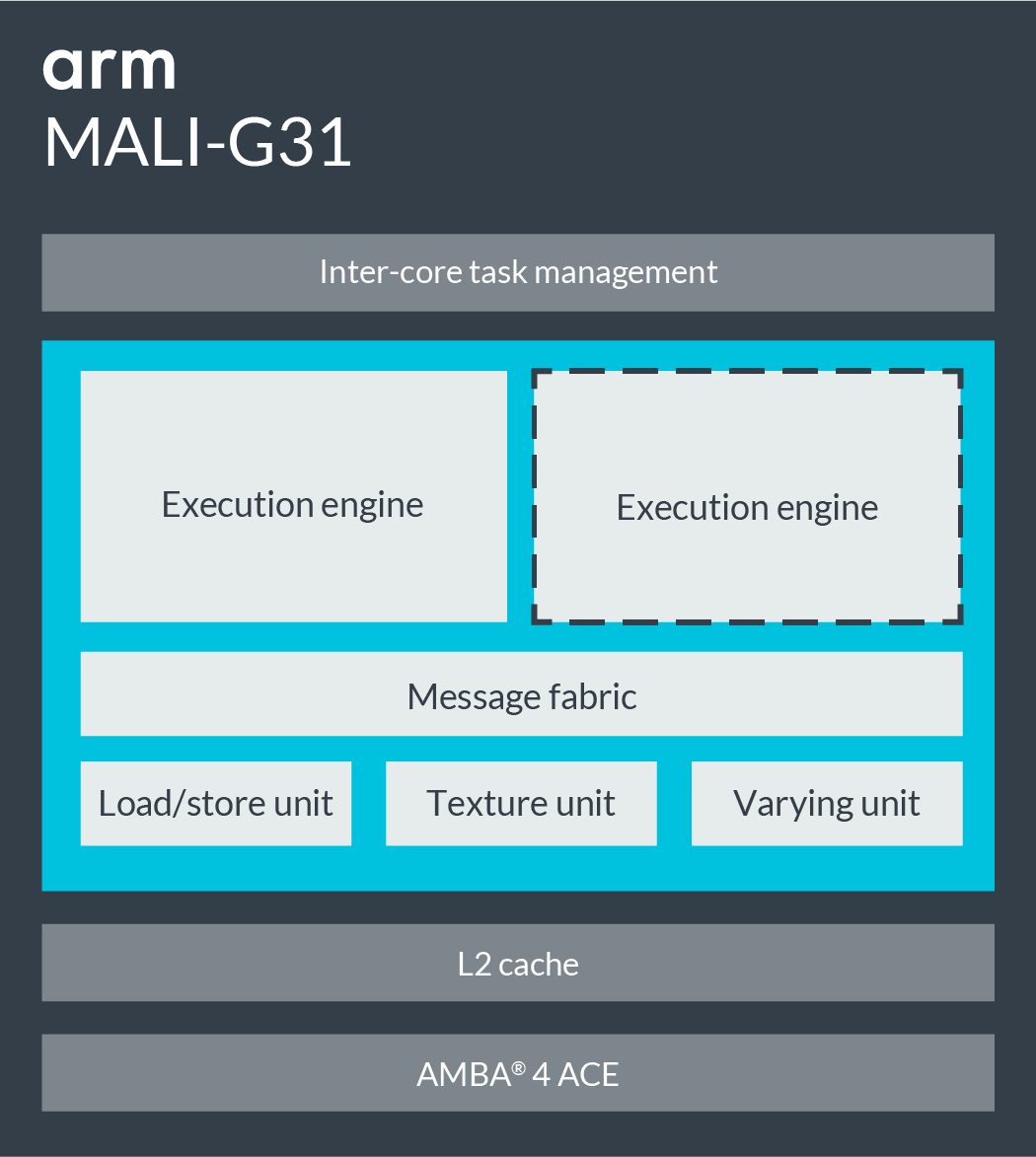 No specific Machine Learning acceleration in Mali-G31, but with an area 20% smaller than the Mali-G51, 20% better performance density for complex workloads and 12% improvement for the growing complexity of UI, the GPU should find it way into entry-level SoC manufactured using 28nm process. It’s also the smallest Arm GPU supporting the latest OpenGL ES 3.2 and Vulkan API. The GPU will be found in Arm Cortex A55 processor, and be clocked at up to 650 MHz delivering 1.3 Gpix/s. 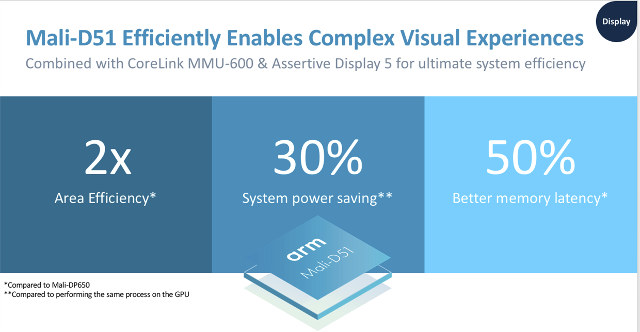 Mali-D51 display processor is based on the same Komeda display architecture as the higher-end Mali-D71 DPU, but with an area 30% smaller since it does not directly supports 4K, but can downscale it to screens up to 2048×4096 pixels at 60fps.

Mali-D51 achieves twice the scene complexity in the same area as a dual display implementation of the previous generation Mali-DP650, and while driving a single display adds a second set of four composition layers to the scene. Memory latency has also been lowered by 50%. 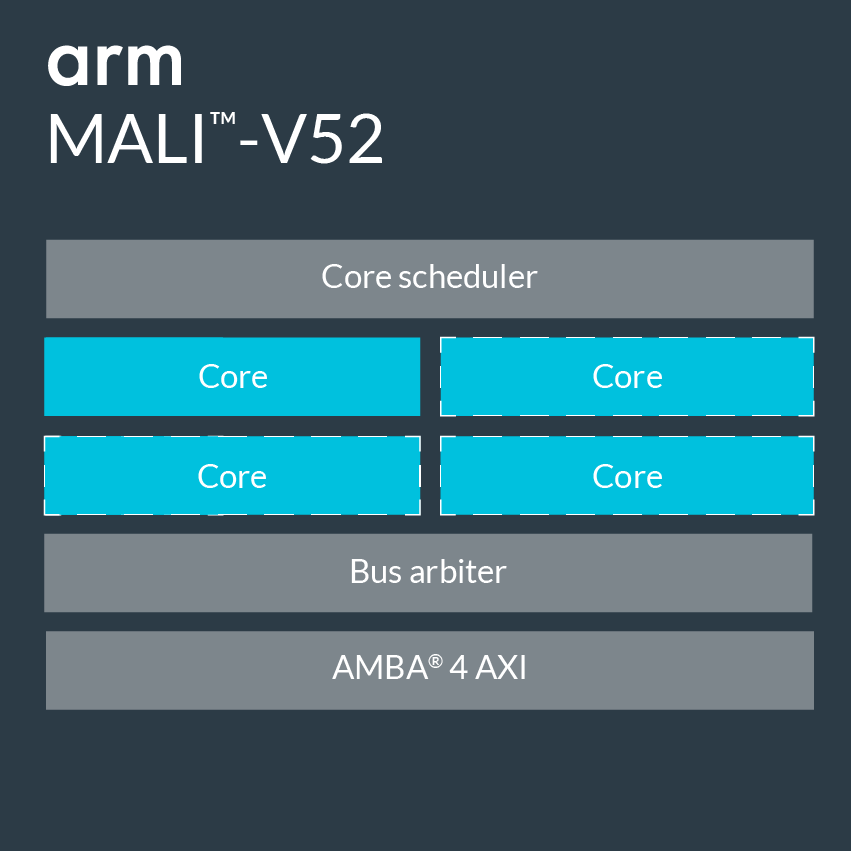 Mali-V52 is an update to Mali-V61 and provides 20% better upload quality, 38% smaller silicon area, and double the decode performance. The platform is scalable from 1 to 4, and the four core version supports 4K120 decoding, and 4K60 encoding. Beside the already supported 10-bit H.265 and VP9 encoding/decoding, the VPU adds High 10 H.264 encode and decode capability to Levels 5.0 and 5.1 respectively, as well as AVS Part 2 (Jizhun) and Part 15 (AVS+, Guangdian) decode capability for YUV420.

More details can be found on the blog posts for the GPUs and DPU/VPU.