Earlier today, I’ve posted a list of some interesting sessions for the upcoming ELC 2013, and one of the talk entitled “Lessons Learned in Designing a Self-video Self-hovering Nano Copter” by Gregoire Gentil, Always Innovating CEO, caught my attention. In this presentation, he will talk about the technical challenges the company encountered when they designed MeCam, a self video nano copter to point-and-shoot yourself, that should sell for just $49 retail. 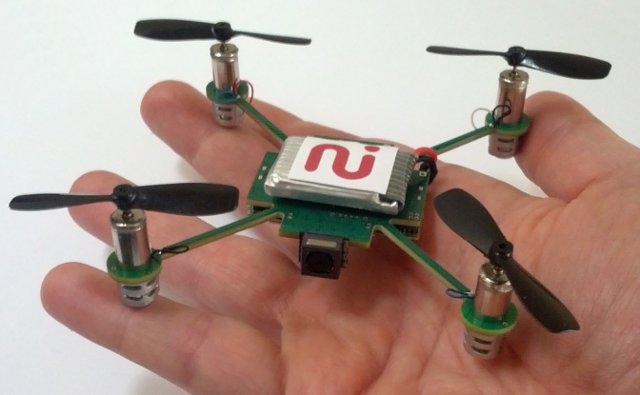 The MeCam launches from the palm of a hand and hovers instantly. It streams video to an Android or iOS phone or tablet that can be easily shared on social media platforms such as YouTube, Facebook, Google+ and Twitter. There’s no remote control for the MeCam as it’s either controlled by voice commands, or it can be setup to follow you around thanks to the follow-me feature. It can also do panorama shots automatically.

The products is still in development, so the detailed specs are not available, but it’s based on a CPU module with the following characteristics:

The device also includes 14 sensors including side object detectors, and makes use of 3 stabilization algorithms (2 auto-pilots and a unique video stabilize) by Morpho. There’s no information about the camera, and battery capacity (and expected battery life), which are kind of important for this type of device. However, those 2 components are flexible, and may vary on different versions. I’m pretty sure it’s running embedded Linux since they will give a presentation at the Embedded Linux Conference. Always Innovating MeCam is said to be based on open source and open hardware, but I don’t expect the design to be open sourced…

I could not find a proper live demo of the MeCam, but Gregoire uploaded a promo video for the device that explains what it’s capable of, including a short peak at the MeCam in action, and that just looks awesome. It could lead you to say “Want!” or even “Shut up and take my money!”.
Always Innovating is a design company, not a manufacturer, so they are currently looking for licensees, and expect the MeCam to hit the shelves in Q1 2014. You can find more information on Always Innovating’s MeCam page.