Oliver Schinagl, a member of linux-sunxi community working on open source kernel and bootloader for AllWinner SoCs, has given a presentation of the community at FOSDEM 2014 to give an overview, and show what progress has been made to date. I’ll write a summary in this post, but if you want to watch the video and/or access the slides scroll down at the bottom of the post. 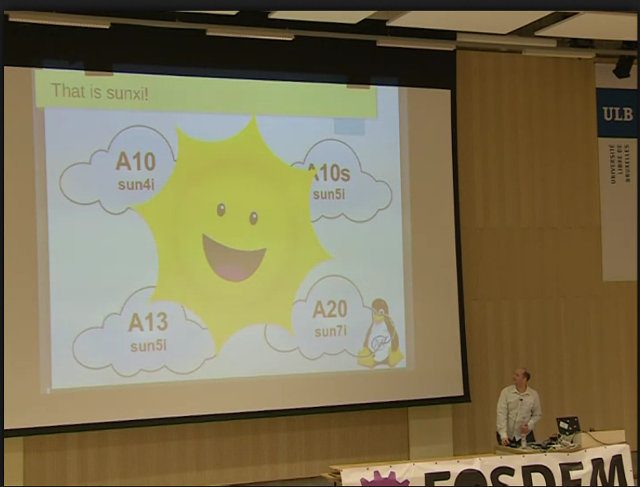 After explaining what sunxi is, and introducing himself, he gave some information about AllWinner and their SoCs:

Sunxi community was born out of arm-netbook community working on EOMA68 boards in order to specifically target AllWinner SoCs, and now count over 600 mailing list subscribers (Google Group), 130 in IRC (#linux-sunxi), but only around 20 active developers.

Oliver then talks about the progress and status of different part of the software:

Interestingly one important OS is missing: Android. The main reason is because there’s no community around Android with sunxi, but there’s still minimal work being done on Replicant/CyanogenMod, and AllWinner SDK for Android has been released.

He then goes through the different Linux kernel and branches on linux-sunxi github repo:

He also talked of FEX files, the configuration files for AllWinner SoCs, that have a functionality similar to device tree, and in kernel 3.10 both device tree and fex files are supported. There’s also a tool called sunxi-babelfish that converts fex files into device tree files.

That’s all of the open source software part of the talk, and next is a list of hardware for playing around with AllWinner SoCs:

AllWinner based device are unbrickable, as they can always to booted from a micro SD or SD card, and if no SD card is available, you can use FEL-mode to access the board via USB.

So all in all there’s currently good support for sun4i (A10), sun5i (A10s and A13) and sun7i (A20) SoCs, and it could even become FSF endorsable, but nothing is perfect, as the community is not really involved in A31, A31s and A80 development as these are based on PowerVR GPU, with no hope of ever getting open source GPU drivers in Linux, and there are binary blobs with Mali GPU (3D), GPS, and touchscreen drivers, and the Boot ROM (BROM) and CedarX libraries (APU/VPU) are only available in binary format.  There’s however work on open source Mali GPU driver (Limare) which could be usable this year, and there’s reverse engineering work being done for video decoding.

Oliver shows a demo of hardware video playback with a 100% open source implementation, capable of even playing files not supporting by the official binary only version, and gets a around of applause when he announces the complete presentation was done on an AllWinner board.

The presentation slides are available here.

Tweet Oliver Schinagl, a member of linux-sunxi community working on open source kernel and bootloader for AllWinner SoCs, has given a presentation of the community at FOSDEM 2014 to give…