You may have some old VHS tapes that you want to digitize to play on your computer or media player, or don’t feel like spending money on an HD recorder for your satellite or cable TV box, but still would like to record your favorite programs. It’s actually possible to do so for less than $7 thanks to USB video grabbers. Those USB capture cards are nothing new, but I did not know the price had come down that much. One of the cheapest capture card is Easycap DC60 (clone?) that sells for $6.80 on Aliexpress, and runs on Windows, and (if you are lucky) in Linux. 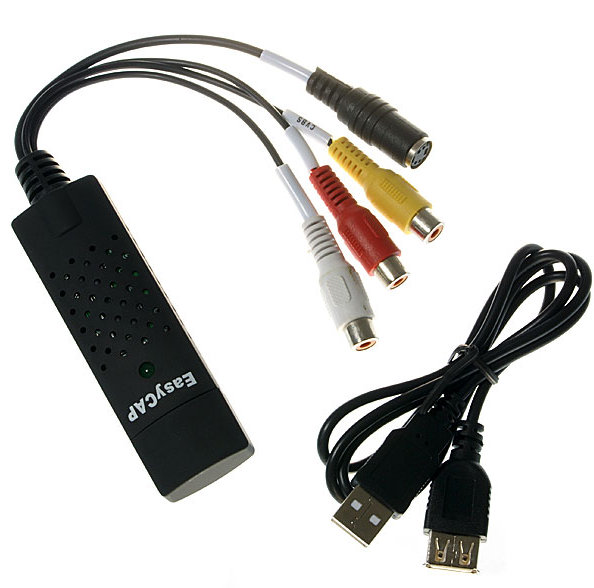 The device provides stereo audio input, composite input and S-Video input. It is sold with a USB cable to connect it to your computer. CD is normally provided with Windows drivers and program. All you need is a Windows 2000/XP computer with a free USB2.0 port, 256 MB RAM or more, 600MB available storage, and at least 1024×768 screen resolution. The program (Ulead Video Studio 8.0 SE DVD) needs  Microsoft DirectX 9.0 and Microsoft Media Player 7.1 or greater to work. Feedback is good on Aliexpress, but not so much on Amazon, as it’s not exactly straightforward to install and configure. Those who succeeded appear to be satisfied.

I also mentioned potential support for Linux in the introduction, as the instructions are available online. The problem is that Chinese websites sell Easycap USB capture card clones with at least 4 different hardware solutions:

The re-sellers won’t usually mention which solution their device is based on, so if you intend to use such a device with Linux, you’ll have to take your chance. The Easycap DC60 model sold on Dealextreme ($8.90) appears to be based on Somagic USB video bridge.

Onebir, a regular reader and commenter on this blog, suggested me to try it with one the mini PCs and write instructions, as some people might be interested to record and watch Cable TV programs with their HDMI TV Dongles. In many countries, cable TV is now broadcasted in HD, but recording with such device would downscale the resolution to NTSC/PAL, so I’m not sure that many people would be interested. If you are, please leave a comment, and if enough people beg ask me to give it a try, I’ll buy one. I doubt it will work with Android, so it would be done in Linux which narrow down the sticks that can be used, especially since we’d also need proper video playback of. If somebody has already done something like that, just let us know.