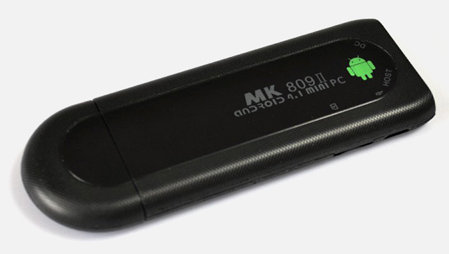 Here are the specs of the device:

The package includes the power supply, a USB cable, and a user manual in English. This is basically the same specifications as UG007, except MK809 II has one extra micro USB port. The device also features a software power button missing in many devices.

Even though some developers are working to port Ubuntu to Rockchip RK3066 devices, don’t expect to be able to do too much with Linux, as GPU and hardware video acceleration won’t be ported to Linux due to a complete lack of open source (and even binary) drivers. It would still possible to use it as a small Linux server however.

MK809 II can be purchased on Aliexpress for $56 on Kimdecent store, but other Aliexpress sellers also offer it at various prices. You can also get it for $5 less with “mainagame5″ coupon.